If your using Puppet or Puppet Enterprise with a Control Repository (which you definitely should be), then you may have noticed that the instructions mention two main ways of getting this working:

Many larger organisations don’t like to download Puppet Modules (or any code!) directly from the Internet, since this means:

For Puppet, the prevailing wisdom to deal with this has been to host all forge modules in their own git repositories. This addresses the business continuity problem and somewhat protects against poisoned upstream repositories but there are a few problems with this approach:

What software is needed to host a private Puppet Forge?

The main Puppet Forge website doesn’t just host packages as a bunch of tarballs in a directory structure. It implements the custom Puppet Forge REST API.

REST itself being a way to build self-describing web interfaces.

Because of the need to implement an API, you can’t just host files on a plain webserver, you need something called a repository server to make the files and the API available.

In this article, we’ve evaluated the current crop of repository servers for you so that you can be up and running as fast as possible.

Note that we are specifically talking about hosting The Puppet Forge itself in this article. If you just want to snag some binaries using Puppet you can totally do that… today!

SonaType Nexus does not have Puppet Forge support in any version:

Perhaps it will be added at some point in the future…

We evaluated Pulp in May 2018, since then there have been some more commits, so these issues may since have been resolved

Pulp works well if your using RedHat Satellite but this mode of operation relies on Satellite itself pushing modules to the built-in Puppet Master. This won’t work nicely with Puppet Enterprise and R10K/Code Manager.

At time of evaluation, we were unable to get Pulp working as a Puppet Forge compatible server due to missing /modules endpoint.

There are some tickets around Puppet Forge support:

JFrog Artifactory was the stand-out repository of the crowd. Not only does it offer full support for the Puppet Forge API, it even offers a click-through GUI to set it up which only takes about 10 minutes and that’s if you take it slow and read all the instructions.

If your in a corporate environment and can afford the licence, using Artifactory to host your local Puppet Forge repository is a no-brainer.

Kudos to Unibet for making and releasing their forge_server project as Free Software!

The server itself looks good and works great. If you just want a local cache of forge modules with no fuss and no frills, then this might be the repository server for you.

If your in a corporate environment there are a couple of big gotchas which you would have to work around yourself to put this into production:

Assuming your in a corporate environment and have chosen Artifactory, the steps to setup are really simple. In-fact, their only shown here to illustrate just how simple it is: 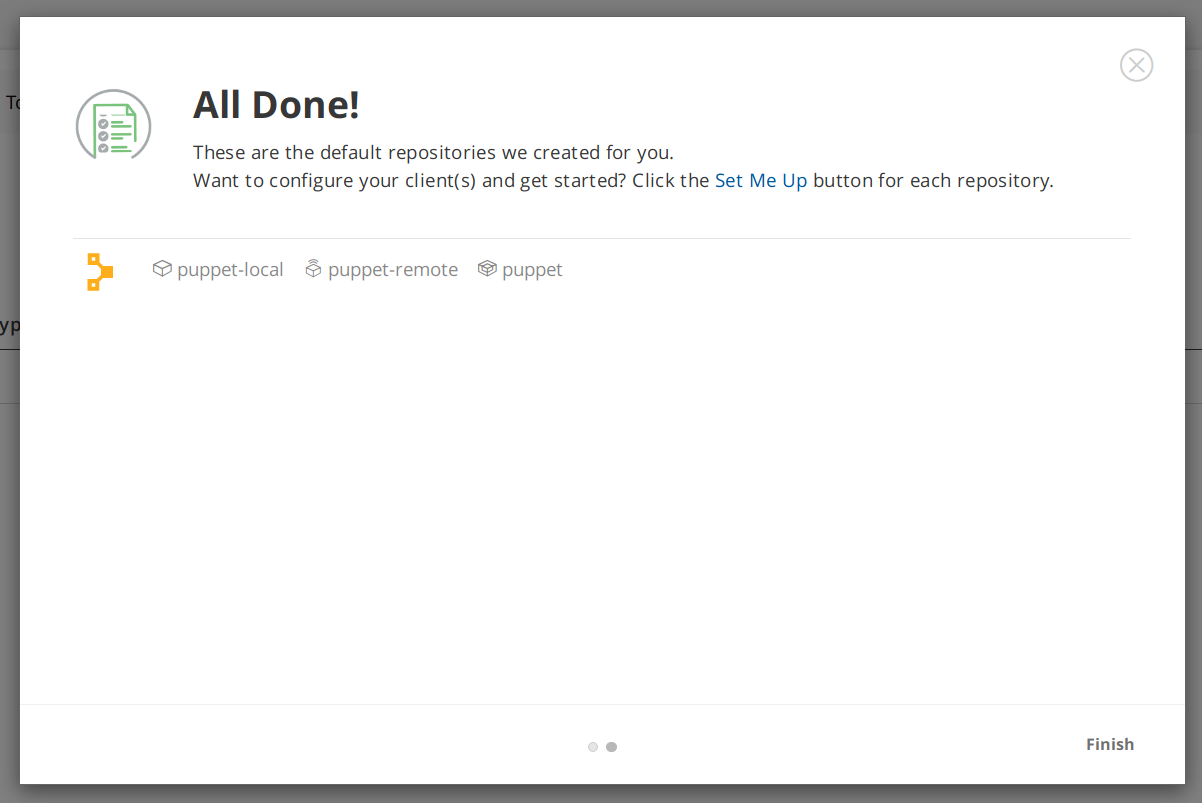 With your repository URL handy, your ready to configure Puppet Enterprise to use your Private Forge instead of the Internet.

Puppet Enterprise is configured by setting the forge_settings parameter of the puppet_enterprise::master::code_manager class. The easiest way to do this is with Hiera, like this:

If you look closely at the above, you’ll notice we have a Chicken and Egg problem:

At Declarative Systems, our attitude is: “Screw the chicken and the Egg! You come first”.

Find where class puppet_enterprise::master::code_manager in the Node Classifier and set the value for the forge_settings parameter to be a hash which defines a key baseurl containing the URL you obtained from Artifactory.

Adjust the value for baseurl with the URL from Artifactory

The settings changes won’t take effect until Puppet has been run on the Master:

After this run completes (you must already be using Code Manager), Puppet Enterprise will be configured to use your Private Forge.

To deploy code using your new Private Forge, just run the puppet code deploy command as usual and Code Manager will use your new Artifactory server.

You can look at the Artifactory logs to confirm correct operation. If there’s nothing in the logs and you get strange errors from Puppet Enterprise, the very first thing to do is make sure your Artifactory server is reachable from the Puppet Master:

You can choose to configure Artifactory as a smart proxy, where modules requested are cached locally. If this is the case, you have no more work to do since Artifactory will allow the use of any version of any Puppet Forge module in this mode.

If you have more stringent security requirements, you probably configured Artifactory to only serve approved modules.

In this case, there are a couple of ways to load Puppet Modules into Artifactory:

Since we’re all about Automation, we already developed a simple Ruby script to:

The download and upload steps are separate in-case you need to connect to different network for different parts of the job. Separate jobs also allows you to manually inspect the contents of each Puppet Module tarball before you publish to Artifactory.

This experimental script uses basic authentication to do the uploads for the moment. We’re keen to hear your feedback on it.

Use Artifactory to serve all the binaries you need, and configure Puppet Enterprise to download from it.